← more from
Meta Records
Get fresh music recommendations delivered to your inbox every Friday.

Ragmala: A Garland of Ragas 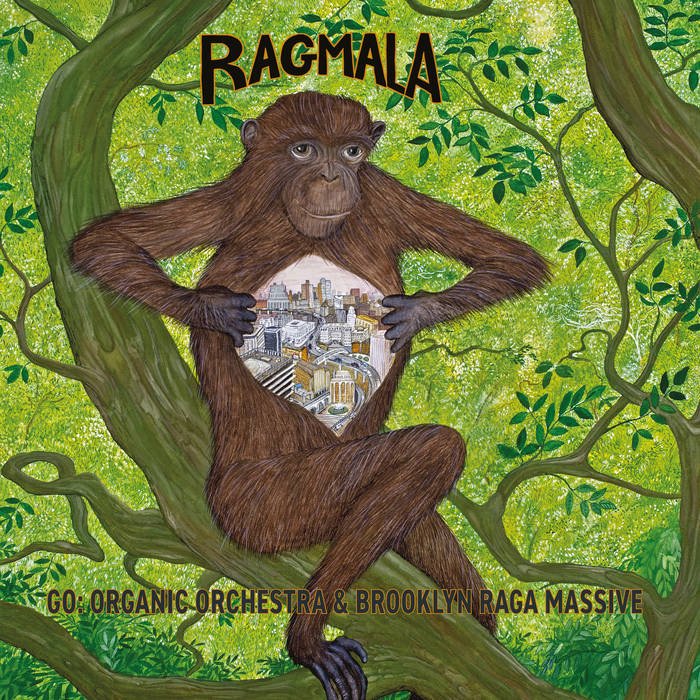 TheSlowMusicMovement With its 40 piece ensemble, clarity of vision & unrelenting intensity the Outernational Indo Jazz of restless souls, Go: Organic Orchestra & Brooklyn Raga Massive
is an epic global jazz fusion spectacle that can stand tall next to the best of the '70s.

Peter Tush This might be Adam Rudolph's greatest release - and I think I have all of them. If you love electric Don Cherry, Codona, the electric Indian fusion of Miles Davis, you must get this. Ambitious, orchestral, spooky, grooving. It is the whole package. A must have!

chris in the redwoods

On the remarkable new album Ragmala – A Garland of Ragas, Rudolph’s Go: Organic Orchestra and Brooklyn Raga Massive form a singular ensemble that vibrantly bridges musical and cultural distinctions. The result is a breathtaking set of music that carves an egalitarian and communal way forward while reverberating with echoes of the recent and ancient past. Drawing parallels with another ground-breaking and singular epic, Ragmala has already been referred to as a Bitches Brew for the 21st century (Ahmet Ali Arslan of Açık Radyo Istanbul).

The members of the adventurous BRM collective are deeply steeped in the traditions of Indian classical music. They refuse, however, to be restricted by it; the idea behind the collective, birthed in 2012 in a Prospect Heights bar, is to open the often rigid and hierarchical culture of the music to experimentation and cross-cultural collaboration. This collaboration marks the collective’s most ambitious effort to date in the musical movement that the New York Times, Wall Street Journal and New Yorker have recognized as a “Raga Renaissance.”

“This album feels like the culmination of everything I’ve been reaching for throughout my career,” says Rudolph, no small claim from someone who’s been a pioneering voice in jazz and world music for more than 40 years. “Through my music I want to hear the humanity of all these different musicians shine through, and with their voices bring forth something that’s never existed before.”

According to BRM guitarist David Ellenbogen, who co-produced Ragmala, the possibilities offered by Rudolph’s music scratched the very itch that led many of them into BRM’s more exploratory fold to begin with. “I always had a theory that Indian Classical, jazz, West African music and so on could have a synergistic relationship,” Ellenbogen says. “But after spending decades looking through record libraries, I found very few recordings lived up to the potential of these great traditions. I've spoken to other musicians on this album and they said the same thing when they heard these tracks: This is the music we've been searching for.”

Music composed and improvisationally conducted by Adam Rudolph (Migration Music BMI)
Mousa Azure and Chakawali by Hassan Hakmoun and Adam Rudolph (Hakmoun Music BMI, Migration Music BMI)
Signal Rhythms arranged for Bata ensemble by Adam Rudolph and Harris Eisenstadt.
All music organically arranged and orchestrated by Adam Rudolph.
Recorded December 2018 at Orange Music Studio, New Jersey.
Recording, mix and mastering by James Dellatacoma.
Studio assistant - Mas Yamagata
Design by Sylvain Leroux.
Paintings by Nancy Jackson.
Cosmogram score materials by Adam Rudolph.
Sanskrit calligraphy by Subrata Basu.
Produced by Adam Rudolph, Mas Yamagata and David Ellenbogen.
Special thanks to Bill Laswell, C. Daniel Dawson, Michael Lucio Sternbach, Tim, Dawn and Elke at The Rubin Museum of Art and Gabe, Justin and the team at Pioneer Works.
Dedicated to our families: Those here, those gone, and those still to come.
We are grateful to Yusef Lateef and Don Cherry who opened the doors to the world for us all.

Bandcamp Daily  your guide to the world of Bandcamp